I wasn’t planning on reading THE HAPPY EVER AFTER PLAYLIST. While I respect how many devoted fans Abby Jimenez has, her debut novel, THE FRIEND ZONE, did not work for me. I was ready to pass on her sophomore novel when I generously received a complimentary audiobook listening copy from Libro.fm. I figured I would give Ms. Jimenez’s books one more try.

Let me first say, the narration sucked me in right off the bat. It was dual narrated and I really enjoyed listening to narrators’ voices. The plot sucked me in right away too. Sloan, our heroine, lost her fiancé two years previously and is still stuck in a pretty intense cycle of grief and living in LA. Jason, our hero, is a rockstar on the rise backpacking and touring for four weeks in Australia. They “meet” when Jason’s dog escapes his neglectful dogsitter and jumps into Sloan’s car. They start their relationship through long-distance texting and calls. As far as meet cutes go? This book has a pretty epic one.

I enjoyed the first part of the book SO MUCH. Yes, Sloan was still recovering from her grief and finding herself, but it was fun and flirty too. Jason was adorable and I love their epistolary first interactions. Jason is so darn endearing in the first half too. What a gem. I really wish the whole book had stayed in this vein.

Most of the book, Sloan and Jason are trying to figure out their relationship as a couple. I love stories like this. It’s interesting to see two people attempt to merge their lives, especially when one is a touring rockstar, and the other is a relatively normal woman with roots in LA. Where the book started to take a turn for me was when Sloan and Jason hit the road together.

As a true romance fan, I feel bad saying this, but Sloan and Jason’s obsession with each other turned from adorable and deeply romantic, to irrational and unhealthy sometime around the 60% mark. The angst of it all almost ripped my face off. I love the idea of soulmates, but the way Jason idolized Sloan became a little ridiculous. It was as if Jason and Sloan actually couldn’t live without each other. They were so completely emotionally dependent on each other, it made me a little sad. Honestly, I think they both needed therapy (Sloan especially).

I also think Sloan’s character could have been more developed. I felt like there were big parts of her personality and background that were left to loose ends. How she went from beauty pageants to a full sleeve tattoo and art. Why the self-portrait above her bed was so important to her. Why she didn’t get therapy after her fiancé was suddenly killed. I felt like Jason was a less complex character than Sloan, which is fine, but this means I need more depth from Sloan to make her feel real.

I had problems with this book, more after I finished and really thought about the plot and its characters, but it’s an unputdownable story. I listened to the nine hour audiobook in less than 24 hours, which is pretty impressive for me. I’ve said this before and I’ll say it again, Ms. Jimenez’s writing is excellent. It’s witty, fun, and keeps you engaged throughout the whole book.

Overall, after the first half of the book, I wanted to love this book and was disappointed to only end up liking it. I would recommend this book to readers, just brace yourself to skim over some of the more problematic parts and you’ll be fine.

4 thoughts on “Review: The Happy Ever After Playlist by Abby Jimenez” 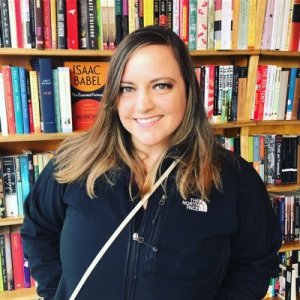