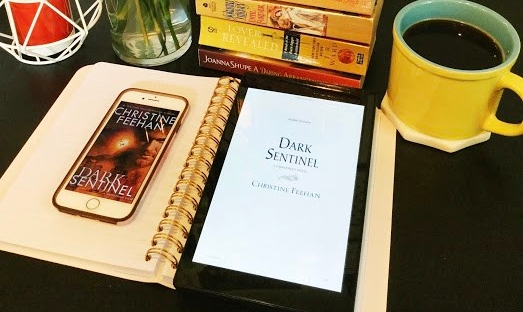 I’m elated that Ms. Feehan finally gave me everything I asked for in a novel! I wanted a Carpathian ancient and a modern woman to figure out their love for each other without the woman making all the concessions. That was exactly what happened with Andor and Lorraine in Dark Sentinel.

Let me just say, I flipping loved Lorraine. She was fierce, compassionate, and occasionally hilarious. The perfect foil to Andor. In the first scene, she fights off bad guys with a saucepan while ranting about inner peace. I was absolutely cracking up. Andor is pretty darn great too. He’s super duper old but manages to control his impulse to order Lorraine around. He understands what she needs on a deep level; he’s very patient and kind with her learning process.

Dark Sentinel was all that I have come to expect and love in a Carpathian romance novel: crazy battle scenes, sweeping love, scorching sex scenes (hello sex while flying on a carousel horse like an X-Rate Mary Poppins)! I was absolutely satisfied with the love story.

My biggest snag with this book is that it was one big set up for what seems like the “next chapter” of Carpathian warriors, the ancients who lived in the monastery. As a building book, the story moved slowly at times. Lots of explanations, lots of discussions and lots of speculation about what the master vampire will do next. Any action that moved the plot forward was at a minimum, the majority of the plot (outside the romance) was setting the stage. As an invested and dedicated Dark Series reader, I didn’t always need the in-depth explanations, but it did help the book to stand alone. I wouldn’t hesitate to tell a Feehan newbie to start with this novel.

Of course, I am absolutely dying for the next book already! The bomb she dropped at the end of Dark Sentinel is so exciting for fans of the series and fans of the last few books especially. I know Ms. Feehan’s written north of seventy books, but I’m still always left wanting more.